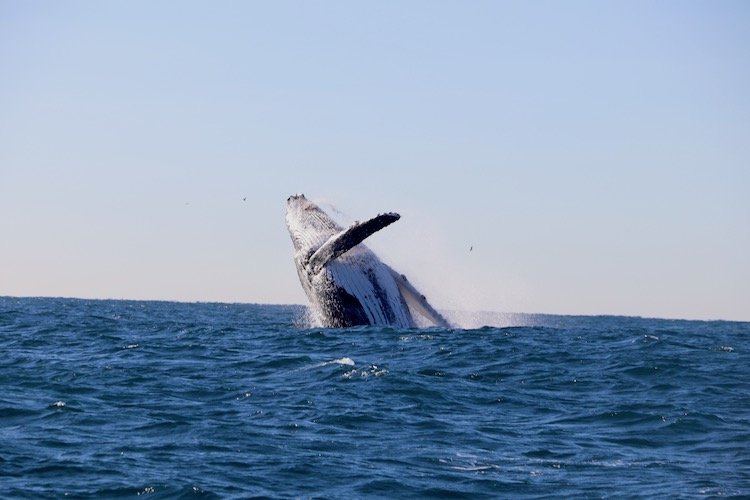 Humpback whales are some of the most curious and inquisitive out of all marine mammals easily identified by the distinctive hump on their back, behind their dorsal fin, but did you know these facts?

1. They Can Bubble Feed

Humpback whales have a unique way of feeding. They are referred to as ‘baleen whales’, essentially meaning they have no teeth. Instead, their mouth is made up of baleen plates. A humpback whales diet is primarily made up of krill and small schooling fish. They trap their prey with a large open-mouth and then filter out the seawater, through these baleen plates. They also have a special trick up their sleeve. This involves an individual or a pod of whales releasing a large air bubble-ring deep underwater. As the bubble-ring rises to the surface it traps fish and the humpbacks then swim to the surface in the middle of the ring with their mouth open. This is referred to as ‘bubble feeding’.

2. They Can Sleep While Swimming

Have you ever stopped to think about how a whale sleeps? Every time you may have ‘watched’ them they were likely to be swimming! Whales have the unique ability to be in a restful state while swimming. They may even swim alongside another whale, while both ‘asleep’. When a humpback calf is born, it is important while it is young to continue swimming as it builds up its own blubber. A whales’ blubber serves several purposes, primarily as fat storage, as well as assisting in the whales’ ability to manage its own buoyancy. The mother can keep a very young calf in her slipstream while she swims, referred to as echelon swimming, so the calf can eat, sleep and rest.

3. They Have One Of The Longest Migration Journeys Of Any Mammal On Earth

Humpback Whales generally migrate approximately 5000kms — this happens to be one of the longest migration patterns of any mammal on earth. The season for us in Newcastle lasts from June to November each year, but for the individual whale, it takes them around three months. It is a journey of epic proportions, whereby the adult humpback whales are effectively ‘fasting’. In the East Australian population there are 30,000–35,000 individuals, with that number currently growing between 10–14% each year.

5. They Were Nearly Extinct

To join CoastXP on an Encounter Tour looking at these majestic animals up close, click here. To learn more about whales, including humpback whales, visit the Wild About Whales website.